This issue is very hard to diagnose, partly because it only happens when you are least expecting it. Sometimes it can happen several times in a short space of time, then when you are waiting for it, it doesn’t happen. Putting aside the temptation to think that this is some clever piece of AI that Microsoft included in Windows to annoy you (not beyond the realms of fantasy, given how many other annoying features are in Windows already, and how reluctant Microsoft seem to be to even acknowledge that people might find them annoying), it does seem like a bug (gasp, you don’t mean…).

Being an incurable tinkerer, I decided to see if I could find out what was going on. The Windows API includes a function to get the foreground window, as well as one to get the text of the current window. Armed with some help from a now-extinct blog post (archive can be found here), I came up with the following, rather simple, but effective program…

This is just a console application project, using .NET Framework (not Core, although it would probably look the same if you used Core). It checks the current foreground window every second, and it has changed since the last time it reported, it dumps a line into the console window. If there isn’t a current foreground window (say if you click on the desktop), it prints “(none)”. I suspect that’s what I’ll see when the issue next happens.

When you run this, you get a console window that opens, which you can leave running in the background. When your window loses focus, you look in the console window and see what got it. In theory, this should give you a clue as to what’s going on… 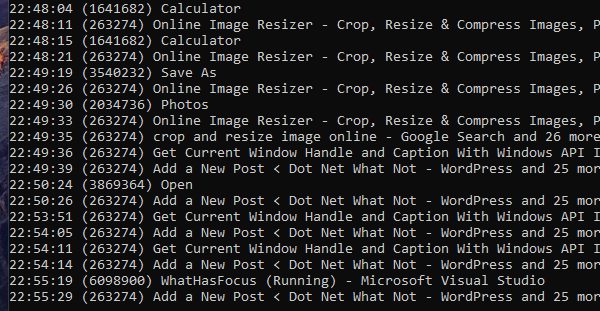 In practice, I strongly suspect it won’t help, but it was fun to write!

Predictably, since I set it running, I haven’t encountered the issue. Maybe that’s the answer!